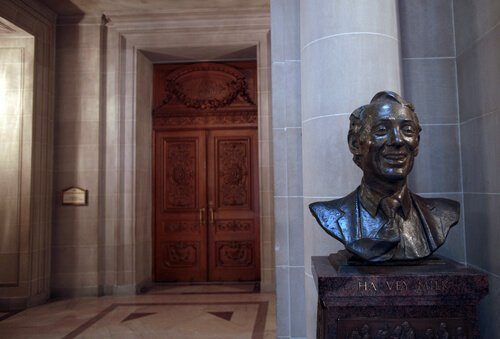 History typically censors the LGBT community; in fact, it’s the only history not taught at home, in public schools, or in religious communities. However, stories of struggle and perseverance always find a voice. In the 20th and 21st centuries, Americans saw several landmark cases and free-thinking revolutionaries that changed the landscape for LGBT people. Below is a timeline highlighting the people and movements that shaped modern gay rights history.

German immigrant Henry Gerber founds The Society for Human Rights in Chicago. As a result, it is the country’s earliest known gay rights organization.

A group of Los Angeles men including Harry Hay found The Mattachine Society. In fact, history considers Harry Hay as the founder of the gay rights movement.

In San Francisco, The Daughters of Bilitis, the first American lesbian-rights organization, rises amidst waves of militant struggles.

Illinois decriminalizes private, homosexual acts between consenting adults. Incidentally, is the first state to do so.

The National Transsexual Counseling Unit establishes in San Francisco. In fact, it is the world’s first transgender organization in gay right’s history.

Patrons of the Stonewall Inn, a popular Greenwich Village gay bar, fight back against an unjust police raid, sparking riots from June 27th through the 30th. As a consequence, the riots prove to unite LGBT activists into a single cause for equal rights and acceptance in gay rights history.

A civil rights ordinance making sexual orientation discrimination illegal in Dade County passes. On the other hand, the Save Our Children campaign led by singer Anita Bryant launches against the ordinance. Consequently, 70% of citizens vote to overturn the law in a special election, marking a painful blow for gay rights history.

In October, about 75,000 marchers participate in the National March on Washington for Lesbian and Gay Rights in Washington, D.C.

The U.S. military institutes the “Don’t Ask, Don’t Tell” policy, banning “homosexual activity.”  As a result, the policy leads to the discharge of thousands of men and women in the armed forces.

The Defense of Marriage Act (DOMA) defines marriage for federal purposes as between a man and a woman. Consequently, it also allows states to refuse to recognize same-sex marriages.

Vermont legally recognizes civil unions between gay or lesbian couples; is the first state to do so in gay rights history.

The House of Representatives approves a bill ensuring equal rights for gay men, lesbians, and bisexuals in the workplace.

The Ninth Circuit Court of Appeals in California rules 2–1 that the 2008 referendum Proposition 8 is unconstitutional as it violates the Equal Protection Clause of the 14th Amendment.

The state of Rhode Island legalizes same-sex marriage.
Meanwhile, the Supreme Court decides its first case ever on the issue of gay marriage. On June 26th, the Court rules that the 1996 Defense of Marriage Act (DOMA) is unconstitutional.

Obama administration officials from the Education and Justice departments send letters and how-to pamphlets to school districts instructing transgender students can use the bathroom that matches their gender identity.

What We Fight For Today in the LGBT Community

Since Obergefell v. Hodges, the LGBT community focuses on the fight against discrimination in housing, public accommodations, and employment. Incidentally, if you or someone you know needs representation in a discrimination case, a lawyer that specializes in law focusing on gay rights history is helpful. Accordingly, Susan T. Perkins is a Rhode Island LGBT lawyer who wins for clients with strong negotiation and aggressive litigation. Even so, if you need legal representation, contact Susan Perkins today.

Rhode Island Visitation Lawyer: How They Can Help Negotiate

Gay Rights History in America History typically censors the LGBT community; in fact, it's the…

Gay Rights History in America History typically censors the LGBT community; in fact, it's the…